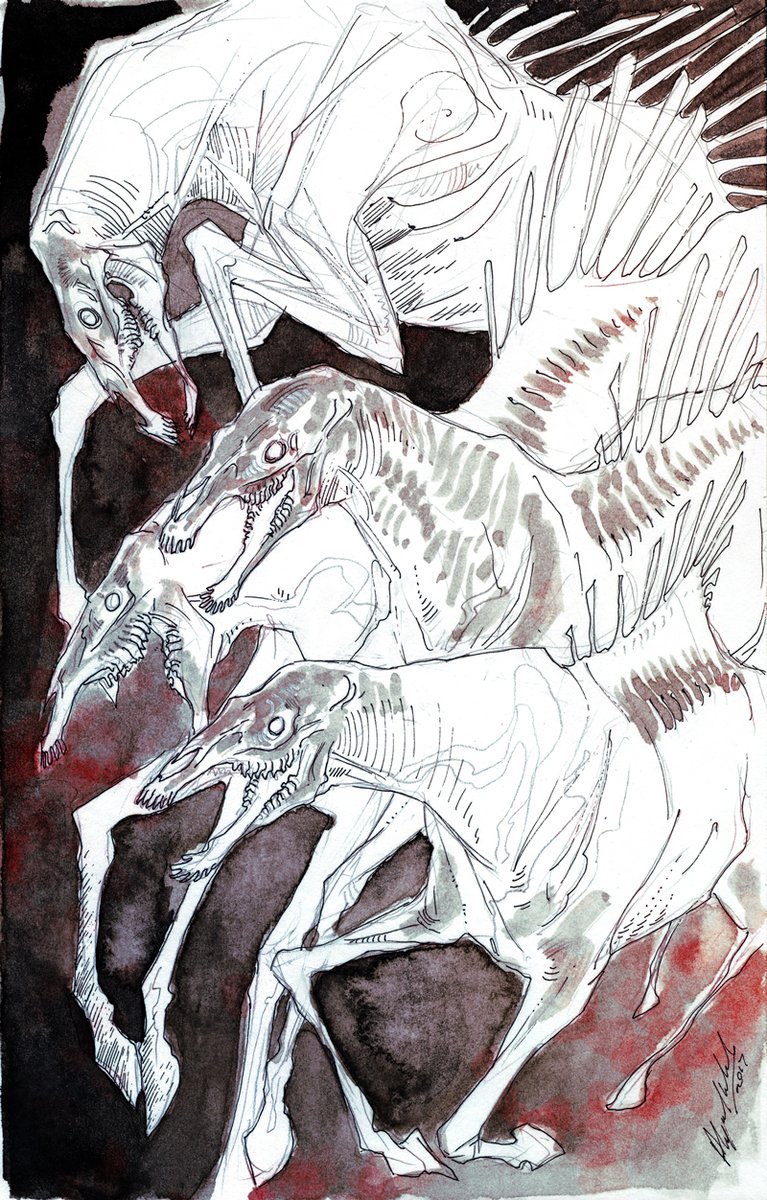 This spooky-wonderful illustration by @AbzJHarding came up in my Twitter feed a few days back. The artist says that their grandmother would tell them to go to bed or ‘the Nine O’Clock horses would come to get us’.

This wasn’t news to me. When I was a kid my mother would too say ‘come on, upstairs, or the Nine O’Clock Hosses will get yer’. When I reached a more enquiring, nay, irritating, stage of my childhood I even asked her what these equine child-nappers actually were and what was the nature of their intentions with me. Mum admitted she didn’t really know; her mum used to say it to her to make her go bed.

So what are they? I’ve met loads of fellow Midlanders who were similarly warned of them. As time has gone on I’ve discovered many northerners have too (In Sheffield, I recall, it’s actually the Ten O’Clock horses. Presumably there’s some early evening congestion charge the Horses wish to avoid), though the myth ends before the Scottish border and the south of England.

Stranger, I’ve never met anyone from rural Leicestershire who’d ever heard of them. My mother had been raised in Leicester’s inner city while my father, who grew up five miles out in Syston, had never encountered the… well, it’s not even a story is it? More an enigmatic threat. The Nine O’Clock Horses, then, are an urban myth, a phantasmagoria of the rainier provincial cities.

Perhaps the oddest element of all is any lack of detail. The Horses don’t drink blood, say, or skin you and wear you as a saddle. You’d think they’d accrue ghastly powers and whims, as myths do, but no. Nothing. In that lies their power, I suppose. As bogeymen they parasite your own visions of what they might be. Abz J Harding draws them as riderless, skeletal and galloping through the air. I used to see them as black with coal-red eyes, likely capable of flight (certainly enough to get up to my bedroom window), but with actual riders atop them in hooded cowls.

Go to bed. Or the Nine O’Clock Horses will get you.

Anyway, the age of Google arrived and a few years back I did a little research, though it took a couple of searches. I’d wagered on the myth having its origins in the northern European-wide tale of The Wild Hunt–perhaps the Vikings had brought it over and thus the geographic locality. Possibly there’s some of the Hunt in the junk DNA of the Horses, a nightmare background radiation if you will, but it’s certainly not the direct inspiration.

(WARNING: SPOILERS. You may be the kind of person who enjoys mystery and that’s fine. If so, turn back now)

I discovered (and please don’t ask for links:  my search was years back and it took ages. By all means have a look and see if I’m lying) that The Nine O’Clock Horses have their hooves rooted in the eighteenth to early nineteenth century. The horses were just horses and they were attached to carts.

The Industrial revolution came fast, faster than anyone could’ve plan for, especially outside of London. The populations of cities like Leicester, Derby, Sheffield and the rest saw exponential rise as people moved in from the countryside looking for work.

This, of course, meant waste. Human waste, food waste, biodegradable rancidness generally. One answer was to move the waste out of the sewer-less towns and into the surrounding countryside. Fortunately, catapults don’t seem to have been suggested as a method. Instead, carts would collect the waste and take it to farms for use as fertiliser. This being a rather unpleasant thing to have rattle past you on the street, town councils mandated laws by which the carts could only enter after a certain time at night. I’m sure you can guess when.

There were rumours–perhaps based in truth, though likely mostly hearsay–that the owners of the carts stole children in order to sell them on to farmers to work the fields, the farms having been depleted of a workforce due to the influx into the industrialised towns. My suspicion is prejudice also played a part: the cart riders would likely be societal outsiders of one sort or another, perceived criminals, Romanies etc.

This is what interests me about the myth, now that I know its origins. The Nine O’Clock Horses are a supernatural tale born from a loss of context. In a past age without sanitation they’re a largely prejudiced but ultimately feasible fear:  the people in charge of the Nine O’Clock Horses will come steal you and sell you to a farmer if you don’t go to bed now. But with the digging of sewers and the constructing of bin lorries the cart men vanish and all context goes with them. All you are left with is the threat:  the Nine O’Clock Horses will get you. The horses become riderless, burning-eyed, flying through the night from–perhaps–the mouth of hell itself. Those poor beasts of smelly, thankless burden have transformed into wild, merciless equines of unguessable power.

From their perspective, at least, the myth of The Nine O’Clock Horses has something of a happy end.

6 thoughts on “What The Heck *ARE* The Nine O’Clock Horses Anyway?”