“Britain’s first freed slave’s buried there,” Mum says as we drive by a church on the way to the dentist.

“Really?” I say from the back of the car.

“Some Rastafarians turned up once,” Mum says, “knocked on the vicar’s door and demanded to take him back to Ethiopia.”

I presume they meant the ex-slave and not the vicar. Still, I’d never heard any of this. Strange, because Wanlip church is near to where I grew up, Syston. And, let me tell you, both places aren’t exactly overburdened with historical interest.

In the dentist waiting room I google wanlip slave grave. I find a site called Black Presence In Britain, which tells me:

Rasselas Morjan, one of the first slaves to be freed in Britain. He was Abyssinian (Ethiopian) and died in 1839 at the age of nineteen. He had been rescued by the Palmer family, owners of Wanlip Hall.

It could be that the Babingtons asked the Palmer’s to employ Rasselas.

The dentist appointment goes alright; I get off lightly with a quick tooth scrape. Downstairs, Dad is waiting for me, his adult son, so he can take me home from the dentists. Mum’s gone to meet a friend nearby so they can shop in Leicester.

“Here, Dad,” I say. “Do you fancy having a look at that grave Mum mentioned?”

Our Lady & St Nicholas is a nice little country church, late 14th century. Exactly the sort of church Phillip Larkin- in his poem– wanders into and idly runs a hand along the font. I recall a childhood holiday in Norfolk, where my dad went a little further than Larkin: he found a vicar’s cape (I don’t know what the proper term is) and put it on, mounted the lectern and started giving a sermon in the style of a stereotypical lisping C of E curate. Mum told him off while me and my brothers laughed like hyenas. Somehow I don’t think we’ll be doing that today.

We search for Rasselas’ grave. For the first time I feel a bit crass, a bit voyeuristic. I mean, why am I doing this? I haven’t really approached this mission with any philosophy, any outlook. I’m just gawping.

We find the gravestone. It’s quite impressive compared to the others here, though the writing on it is almost worn away.

Helpfully, there’s a sign beside the headstone with the epitaph on it. 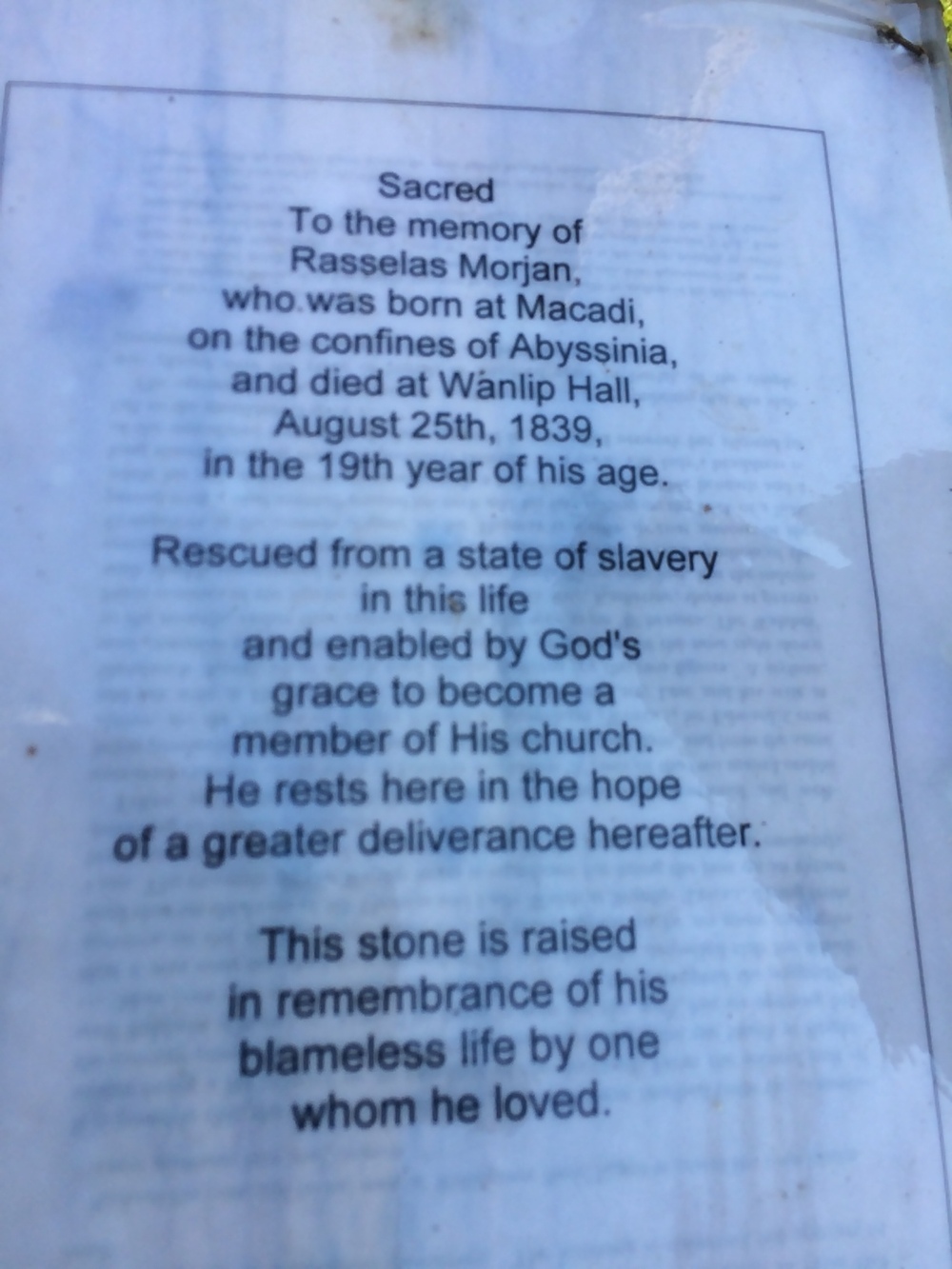 I take a few photos. Dad reads the first line of the first paragraph aloud. Then a weird silence descends, the two of us not sure what happens next.

We get back in the car and a police car stops nearby.

He’s probably right. There’s not much going on in Wanlip.