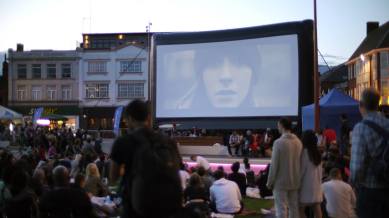 So that short film wot I wrote, Flawless, got shown at Leicester’s Indian Summer free film festival. It’s basically a night where they inflate a great big screen, pop it down on Leicester’s brand shiny new Jubilee Square and invite the locals to watch films (There was even a kiosk handing out free popcorn to everyone. Yes, you heard that right. No, I didn’t save you any).

We were on before a showing of the visually stunning Life Of Pi, directed by Ang Lee. That’s like supporting REM or something. No pressure. 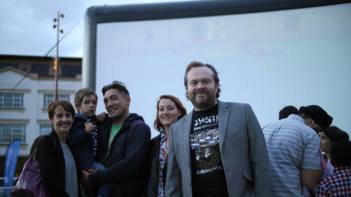 The sound was a bit shaky (especially at the back, I’m told) but I think it carried to the first two thirds of the crowd. And the crowd were pretty quiet as Flawless rolled, which I took for a good sign.

No one clapped as the credits rolled. I shrugged, took it stoically. Least they didn’t boo, I told myself. Buttttt…  when the credits ended a cheer went up and lots of clapping followed. I can’t tell you how much that meant to me. There’s a singular-tingular joy in having your hometown (and not necessarily the ‘arty’ contingent, most the crowd had just come to see a major film (and get free popcorn, did I mention the popcorn?) and enjoy a late Summer night) cheer you and your pals’ creative offering. In fact I’d say their loud approval has to be one of the greatest rewards I’ve ever received in all my time scribbling. As it was happening I knew I had to savour it.

Thanks, Leicester. Still my favourite city, you sexy-as-heck urban conurbation you.