“About time! I’ve been trying to make you read it these last twenty years!”

So texted my pal Matt when I mentioned I’d started reading Red Army by Ralph Peters. It was he who’d sent me a copy. I’d mentioned I needed to engage with military (science) fiction in order to better handle my next novel (a quest that had already led me to Starship Troopers) and so Matt had seen his opportunity and took it. His fervour is understandable. Red Army is possibly his favourite novel and favourite novels are more than just paper. They are a part of you, like skin and sinew. 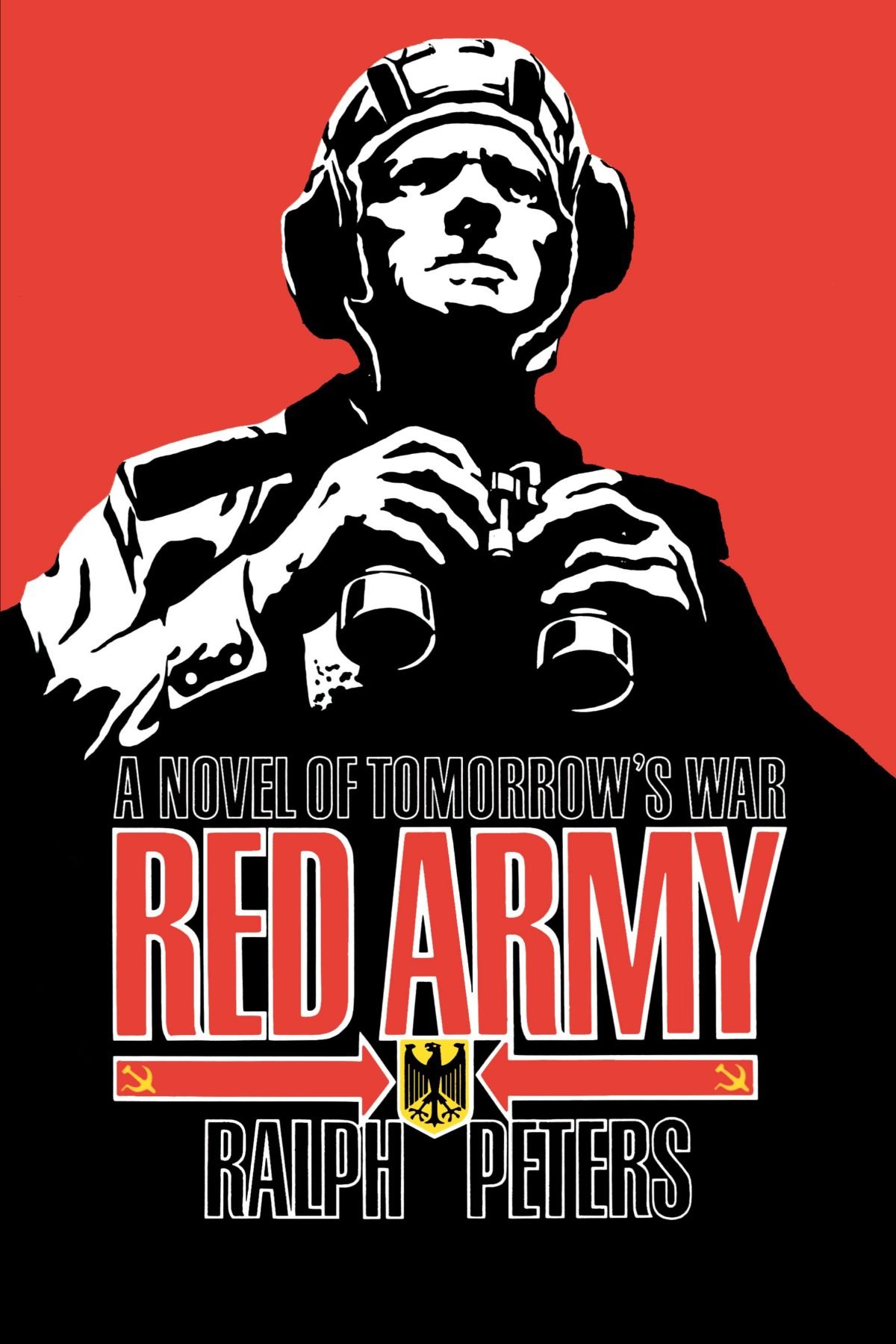 Trouble was, Red Army is an eighties techno-thriller, a sub-genre with more nomenclature than the pre-schism Church, where maverick lieutenants point at city maps and tell cigar-chomping generals ‘You do the math… Sir!’. As a rule, I tend to avoid any fiction that uses the word ‘deployed’ more times than I have fingers. Tom Clancy, of movie and video game fame, is considered techno-thriller’s Dickens.

So it came as a surprise when Red Army destabilised my snob formation in a rapid pincer attack of in-depth characterisation and weaponised prose.

You see, Red Army is good. Really quite excellent. Not everyone’s bottle of vodka, granted, but a novel that knows what it wants to achieve, holds tight to that plan and, paradoxically, exceeds it by doing so. Not bad, considering the mockery and schadenfreude it generated back in the year of its release, nineteen eighty-nine. Red Army is about a Soviet invasion of Europe (Oops…) and within months Peter’s book had suddenly found itself in the alternative history genre, despite pretensions of being a warning to the world.*

(*And, no, Red Army hasn’t found itself ‘suddenly relevant’. Despite Putin’s bravura, the Russia of today has an economy on a scale with Italy)

Red Army eschews its genre’s terminology and martial techno-fetishism. A tank is just a tank and never a XM1 Abrams. And why shouldn’t it be? ‘Tank’ is about the only word your brain will process if one’s about to fire a round at you. Red Army is never trying to inform you about a war. It’s trying to bury you in one.

And bury you in war it does, whether you enjoy that kind of thing or not. In fact, you get a whole front’s worth, from general down to private and everything in between. The main character is the experience of modern warfare itself. It’s a landscape painted in black and red, half-Turner, half-Bosch.

Structurally, a useful comparison (because I get a lot of fantasy readers here) would be my favourite of Joe Abercrombie’s standalone novels, The Heroes, with its portrait of a two-day medieval battle. Both novels understand a vast and violent event can never be objectively told, that it’s more akin to a bunch of blind guys feeling different parts of a particularly surly and bloodstained elephant. But whereas The Heroes is exceptional at making a large and often briefly shown cast of characters distinct from one another, Red Army has greater characterisation in terms of depth.

Peters isn’t afraid to halt the plot in order to bring up someone’s past, often for pages at a time. To his credit, I never once found that irritating. You can extrapolate someone’s hopes and fears from their personal past, of course, and hope and fear are the twin pillars of life during wartime.

There are standout characters (The young political officer coming to realise his private life is a cruel joke comes to mind) but sometimes the uniforms and names blur a little, at least to me. That’s not necessarily a bad thing, I hasten to add, it’s even a sort of plus. As readers, we’re watching–being–an immense organism of soft flesh and lethal metal, a beast slouching toward a bloody Bethlehem, full of instinct, terror, elation and sleep-deprived memory. Heck, some plot-vital characters don’t even appear until the third act (and its kinda hard to tell where acts even begin and end) but none of that matters. Red Army isn’t so much a story as an experience–a human experience–and one that hovers over you long after the books back on the shelf.

War as psychic experience; yeah, that’s Red Army. A novel of inner space, to quote JG Ballard (Oddly, at least two scenes read like his short fiction). Modern warfare is as fraying as it is rapid and, over the story’s forty-eight hours or more, the prose becomes evermore hallucinatory, even dreamlike. It’s so subtle you might not even notice. That’s something I haven’t encountered in many books and I enjoyed it a lot.

Women have an interesting placing in Red Army. Within the actual events of the conflict, aside from a few brief vignettes, they’re almost non-existent (I’m not sure how this compares to the actual Soviet Army of the period). Yet they dominate the inner landscape of the novel. In one sense this is a book about women, or at least the memory of women. Mechanised warfare has a way of whittling down people to a basic essence and at the heart of that essence is their life partner or would-be life partner. If Ralph Peters is in any way accurate in this depiction (and bear in mind he was a lieutenant colonel) then it’s a heartwarming testament to the human condition.

(Of course, one question that arises is why are there no homosexuals in this large cast of men in an all-male army. Well, you know… eighties… techno-thriller…)

The combat itself is superb, as you might expect. With no main character everyone is liable to die on any page. Vulnerability soaks each scene. There are no supermen, only professionals and amateurs, and being the former is no talisman against death as much as being the latter invites it. Battles are never a question of who shall win so much as who shall lose last and that notion permeates the narrative and imagery. Everything is red flames against the black night and black silhouettes against the flames, screaming and engine-howl and terror-laced confusion.

In one scene, two young privates are cut off from their unit among buildings they know to be swarming with enemy soldiers. They stumble into a dark basement, hear shuffling and, short story even shorter, realise they’ve gunned down an entire family of West German civilians. Reading this, I realised I’d likely have done the same, given that, a paragraph before, I was mentally yelling at them to fire, dammit. Reading:  a process of self-discovery, I guess. Ain’t always pretty.

Self-recrimination aside, Red Army is a masterclass in action narrative for any writer. Hunter S Thompson once typed out the whole of A Farewell To Arms, the idea being to better understand how to write a novel. I may do the same with a scene or two of Red Army, so as to grasp a fight.

Red Army has its faults. I’m not shouting about a perfect book here (sorry Matt!). There’s a trait I’ve noticed with politically right-leaning authors (Peters was until recently an analyst on FOX News, but left because he feels it has become a propaganda machine for Donald Trump. He seems to be a Republican from an age when the morals shone brighter than the suits) that pushes their authorial voice out of the viewpoint character if said character is reprehensible, and they end up being judgmental*. For my tastes a writer should never judge their characters; leave that to other characters. Peters is not immune to this from time to time, but to an extent I could forgive.

(*To be fair, it’s a trait I’ve seen increase on the left of recent years. It may be that that’s a symptom of the social media age. We seem to be running back to the Victorian paradigm of a novelist being a teacher of morals rather than a wise friend. But I digress.)

There’s an author’s note at the end, where Peters says he wrote Red Army as a cautionary tale, an act of creative investigation and as entertainment. Well, its use as the first reason is long over. The second reason is reduced to historical interest alone. In 2018, only the third remains. Those of us who care to look now are left with one question: Is this good literature?

Yes. Yes it is. There’s a reason why the people who read these kinds of books back in the day now reminisce online about Red Army so warmly. ‘I keep going back to it’ is a common statement on forums. They keep going back to it in a way they don’t go back to other, more financially succesful, books in this genre. ‘It is not a book about lethal gadgets…’ says the author’s note at the back ‘…it is a book about behaviour’. Which, I suppose, is a tactician’s way of saying it’s a book about the human condition.

Frankly, Red Army needs a new edition. The fresh copy I have still says ‘A novel of tomorrow’s war’ on it. A quote on the back says it ‘should be read in the Pentagon as a cautionary tale’. I shit you not. That’s dreadful, really dreadful.  Red Army needs a new cover, new quotes. It needs a foreword by someone relevant, placing it in context to its time and–dare I say it? Yes, I bloody-well-do–assessing it as a work of art, all its good and bad qualities. It needs to reappraised, it needs to be championed. It needs to be discussed.

But currently it lurks in a no-man’s land or, more likely, a charity shop book bin, its worth drowned out by its long gone warning.

I think that’s a shame.