It’s the mid to late nineties in Chicago and a man comes home to find Spider-man trying to con his girlfriend out of seventy dollars. This incident was just one of several during that decade where both Marvel and DC superheroes pushed their way into this man’s everyday life and acted, well, shamefully. Violence would inevitably break out and- shockingly- the ordinary man would triumph. That man was Wesley Lawrence Willis. His experiences are not counted as Marvel or DC canon, especially in the cinematic universes, but for me they are central to the superhero genre.

Wesley Willis (who passed away in 2003 from leukaemia) was a singer-songwriter and artist. If you’ve never encountered his work before and just listened to the video above you’ve probably found his milieu… striking. He had paranoid schizophrenia. He sung all his solo work over the auto-accompaniment programs available on his Technics KN Keyboard. He got- and has kept- a cult following. He made hundreds of recordings. A subgenre of which involve ‘jerk-off’ superheroes getting beaten up, often with a piece of rubber hose (Which seems to be a sort of universal kryptonite against all meta-humans).

Those songs are my favourite of Willis’. There’s something about Spider-man getting thrown against a bedroom radiator that just plain cracks me up every time I hear it, though your mileage may vary.

In this slower ballad, Batman ‘was being a fucking asshole from the start’…

Wesley Willis was what the art world has long called an ‘outsider artist’, like Henry Darger or James Hampton or, within the online SFF waters I frequent, Chuck Tingle. Whatever their chosen media they hone out a unique vision obsessively, on a lone frequency no one else could ever hope to remotely pick up. Of course, mental illness of one form or another plays its part and those uncomfortable questions always arise: are we, the ‘sane’, exploiting these creators? Is our indulgence and encouragement ultimately a form of mockery? Are we making their mental health worse?

I guess it’s worth asking, especially so in Wesley Willis’ case now that his tune Rock’n’Roll McDonalds has found viral popularity with a new generation on TikTok.

As I see it, Willis isn’t the joke; he’s telling the joke and, with the superhero numbers, it’s a pretty good one. The high camp of superhero personas contrasted with the mundanity of a regular street tussle (and recounted as such) is a nice conceit and one dreamed up by a mind both highly creative and very observant. Willis wasn’t always in control of his mental faculties but he was always in charge of his art.

His music was immensely cathartic for him. He called it ‘the joyride’ and it warded off demons in his head with names like ‘heartbreaker’ and ‘mean sucker’. Why should we feel icky about enjoying what he enjoyed? Aren’t the mentally ill allowed to express themselves to an audience too? Dang, now I think about it, I kinda wanna beat up those questions earlier with a piece of rubber hose.

Wesley Willis wrote songs to heal the sane. I can’t recall who originally said that, but it’s true.

I wasn’t entirely being truthful earlier. Wesley Willis has appeared in the Marvel canon. Sort of. There’s a half-brother of Wonder Woman, a demi-god and son of Zeus, whose likeness and catchphrases the comic’s creators based on Willis. 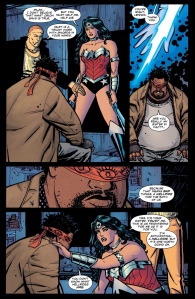 I find that wonderful. I like to think the real Wesley might have found it wonderful too. Who knows?  He might even have wrote a song about fighting his comic book self.

Anyway, here’s a song about the one time a superhero beat Wesley Willis’ ass. Birdman of all people!

Rock over London. Rock On Chicago. WordPress: Create Your Own Website Today!